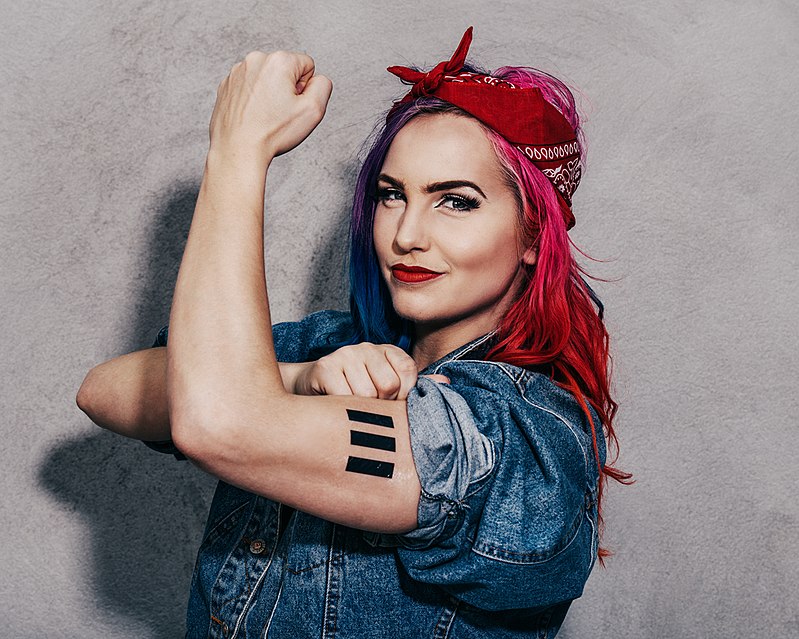 Linnea Claeson: ‘They call me a rainbow warrior’ Part I

The first instalment of The Fem League's interview with Linnea Claeson.

Spotting Linnea Claeson across a crowded auditorium isn’t exactly difficult. Her rainbow hair, pastel blue faux fur coat and holographic bag stand out in a sea of black and grey. She’s the personification of happiness and positivity, which makes the online abuse she’s received since the beginning of her professional handball career all the more shocking. She describes routinely receiving unsolicited, explicit and often violent messages from men online – all while still a teenager.

But, Linnea clapped back. Around two years ago she created the Instagram account, Assholes Online, where she began posting the misogynistic messages she received along with her hilarious, witty clapbacks. For this, she was awarded the Human Rights Prize by the UN Association of Sweden.

Since Assholes Online, Linnea’s activism has reached far beyond her impressive 200k Instagram following. She is now one of Sweden’s most influential young voices on gender equality, racism and LGBTQ rights. She is the ambassador and co-founder of a number of humanitarian organisations including Omtanke Stockholm, an organisation that supports the homeless, Refugee Relief and Kvinna till Kvinna, a foundation supporting women in war and conflict zones.

The Fem League met Linnea Claeson at a Women’s luncheon and panel in Sweden’s capital Stockholm. Backstage, we talked to Linnea about her signature rainbow hair, her activism on and offline and her plans to ‘fight the big leaders with the big suits’

Would you say most people know you as a handball player or through your activism online?

Definitely for my work online, for my [involvement in the] women’s movement. I work for human rights, I work for LGBTQ [causes], I work against racism, for women, for children, for freedom basically. They call me a rainbow warrior because of my hair and I love it; I love it!

I get a lot of threats: from Nazis, from racists [and] from sexists. Every day I hear someone new saying that they want to see me dead or that I’m going to get raped. The thing that makes me special is that I’m still standing here. I’m young. I have a voice. I’m not ashamed to say what I think and I’m not going to move just because they’re scary or just because I’m scared. I’m choosing to be brave. I believe another world is possible and if we want that world we’re going to have to fight for it every single day and that’s just what I’m trying to do.

For every right we gain we also have to defend it. It’s not done, it’s not over, it’s never going to be over.

How do you cope with people telling you every day that you should die?

The first time men started to write things to me and send me dick pics and so on, I was 10 years old. I look at 10-year-old girls now and think, ‘Hell no, ain’t no one gonna treat them that way, [the way] that we were treated.’

Growing up in a world where everything you do as a woman is wrong it’s [a] like double punishment all the way. I don’t want that for the next generation, for our children. So that keeps me going when it’s hard. And then, of course, having a lot of sisters that I know [have] got my back.

They call me a rainbow warrior because of my hair and I love it; I love it!

Was there any point where you asked yourself. ‘Why am I doing this, this is really hard on me?’

When my mother or someone in my family comes to me and says that they are afraid I’m going to get killed or murdered by the Nazis, then, of course, it’s hard. It’s hard to look at my mother and say I’m going to do it anyway. But, I have such strong belief that we need a world that’s kinder, braver and wiser. And we are the ones we’ve been waiting for and it starts with us.

With #MeToo you saw a revolution, the revolution is here. And for a revolution to mean something it means we have to go from words online to actions out on the streets and in the homes and in the workplace and the schools.  We have to fuel this fire so I don’t feel that I can stop or rest. It doesn’t matter. It’s not about me. It’s not about my life. Even if the Nazis kill me, I’ve lived the way I wanted to.

I’m young. I have a voice. I’m not ashamed to say what I think.

How do you stay positive?

Seeing the next generation being so active and conscious. Little kids running around and saying they’re feminists and anti-racists and they’re going to fight for the environment and for animals. They’re so cool and they’re doing things that I hadn’t heard of when I was twelve. Then, I don’t know, I was eating ice cream. [Laughter] I didn’t do shit.

And now since social media, young people have good people to look up to. There are a lot of good content [creators] on the internet and I’m trying to be one of those people; I find hope just watching the next generation.

With #MeToo you saw a revolution, the revolution is here.

How do you think we can harness social media for good?

I think we have to be aware that we always have to fight back. Because for every right we gain we also have to defend it. It’s not done, it’s not over, it’s never going to be over. And maybe that seems tiring but I see it more as inspiring because we get more and more [people] in this army of love.

I don’t want that for the next generation, for our children. I want something else.

There are more people writing love than writing hate on the internet. There are a few people, angry fucking men, mostly, that write shit to people but everyone else: we are more.

I really believe that the only thing that is needed for the evil to win or to conquer, is for good people to do nothing at all. So that’s why I’m always trying to inspire courage: standing up for each other online, out on the streets, in your home, at the workplace. Just say something. Do something. Because, otherwise, the evil is going to win because they’re the only ones that dare to speak up. That’s so important.

How do you hope people will turn your message into actions and what is your advice to those people?

I usually say that we don’t need charity, we need solidarity and with that, I mean that women don’t need to be saved. We need to have men who’re prepared to stand beside us, to fight for this, to fight for equality, to fight for a world full of possibilities for both genders: together as equals. That’s what we need.

I always call my followers my rainbow army because we fight for freedom.

So for men, I think that you should really start to challenge the way you look at women, not only in your own personal life but also, which women do you look up to? What music do you listen to? What books do you read? How many female authors or musicians can you name? Really question why, seemingly, you have so many more men that you look up to. To really challenge themselves and what they’ve learnt and the structures – that’s what we really need to see from men.

And for women, I think the best advice that any woman can get is to do whatever the hell she wants because we’re taught so many things, like, don’t even get me started on, ‘How to avoid rape’ tips. What the fuck is that? I want 20 tips for men to avoid raping women.

There are a lot of good content [creators] on the internet and I’m trying to be one of those people.

Women, just do whatever you want. Don’t be ashamed of who you are. We’re all just in this together with self-hate because we’re taught that we’re not supposed to love ourselves. So really lift other women and also try to take back your own body. The day we were born society stole our bodies and we’ve got to take them back and make them ours because so much starts with sexual violence against women. Equality, economic power but also sexual power and being the masters of our own bodies.

Our current issue, ‘Seasons’, is all about celebrating the different seasons of women’s lives. Is there anything that you’ll take with you from this season into the next?

I’m really sure of this answer because I think about it so much and that’s the sisterhood. Women have become the most important relationships I have in my life and I think they always have been but I just didn’t know it yet.

I think that when I really started to put my sisters first, before all other relationships, I got a more stable but also a lot richer life. It’s so reassuring to have women in your life that you trust and that they’re always going to back you up no matter what. If the Nazis come banging on my door I know that I have a lot of sisters…

That you can call?

I can call and they’ll come. [Laughter]

What plans do you have in the immediate future coming up? Do you have anything that you’d like to share?

I am really a dreamer and a visionary. But I have very few dreams for myself and a lot of dreams for our world and our society.

I’m going to Brussels to speak to the bosses of Europe and try to shake it up a little bit with them, stir up some trouble with the UN.

I’m also trying to keep on spreading my message on social media. Like starting up a YouTube channel because I really think we need more content, more women’s writing, more sexual liberation, more [of a] civil movement on that platform. I really want to create strong independent kids because that’s what we need. 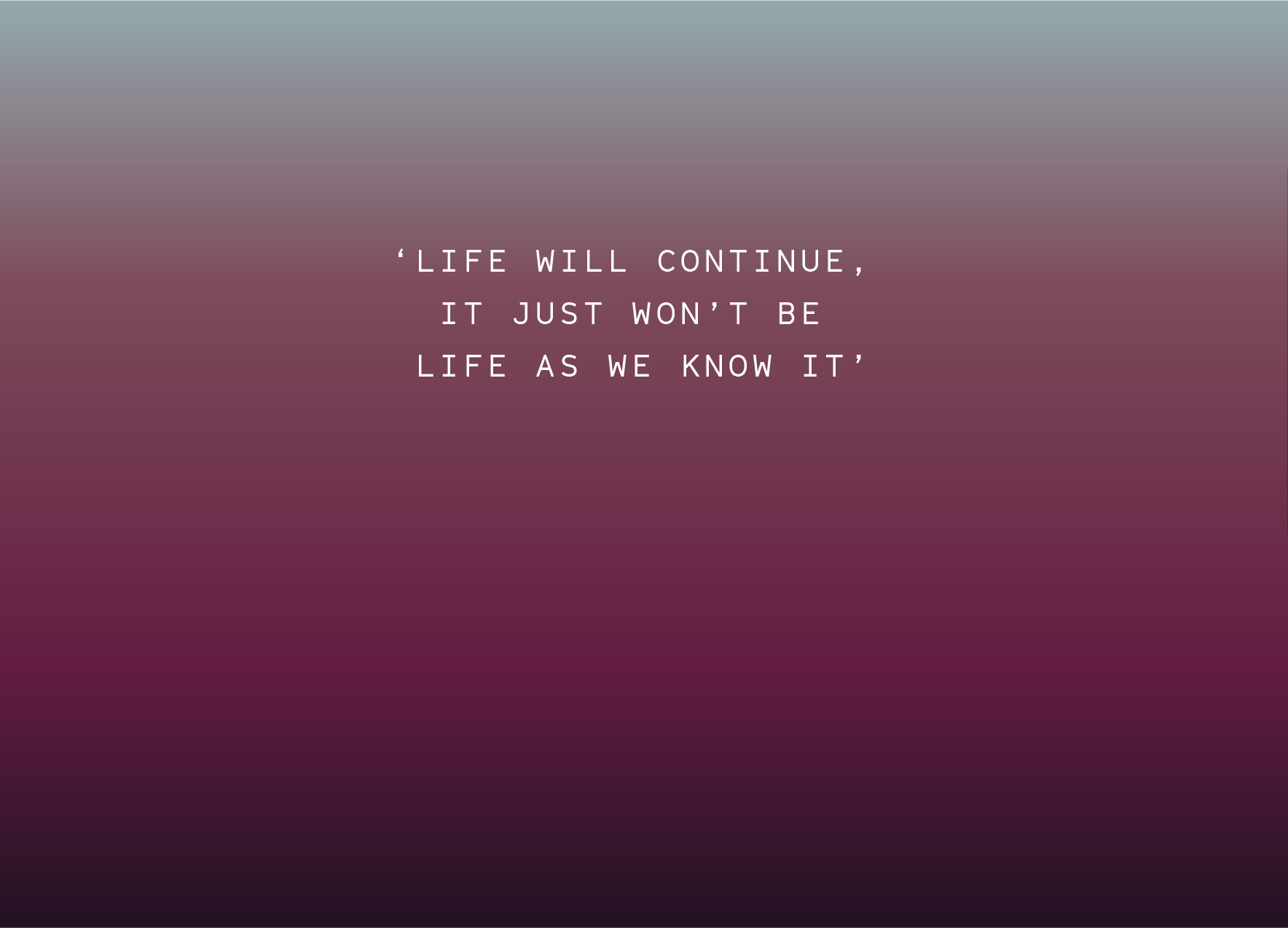 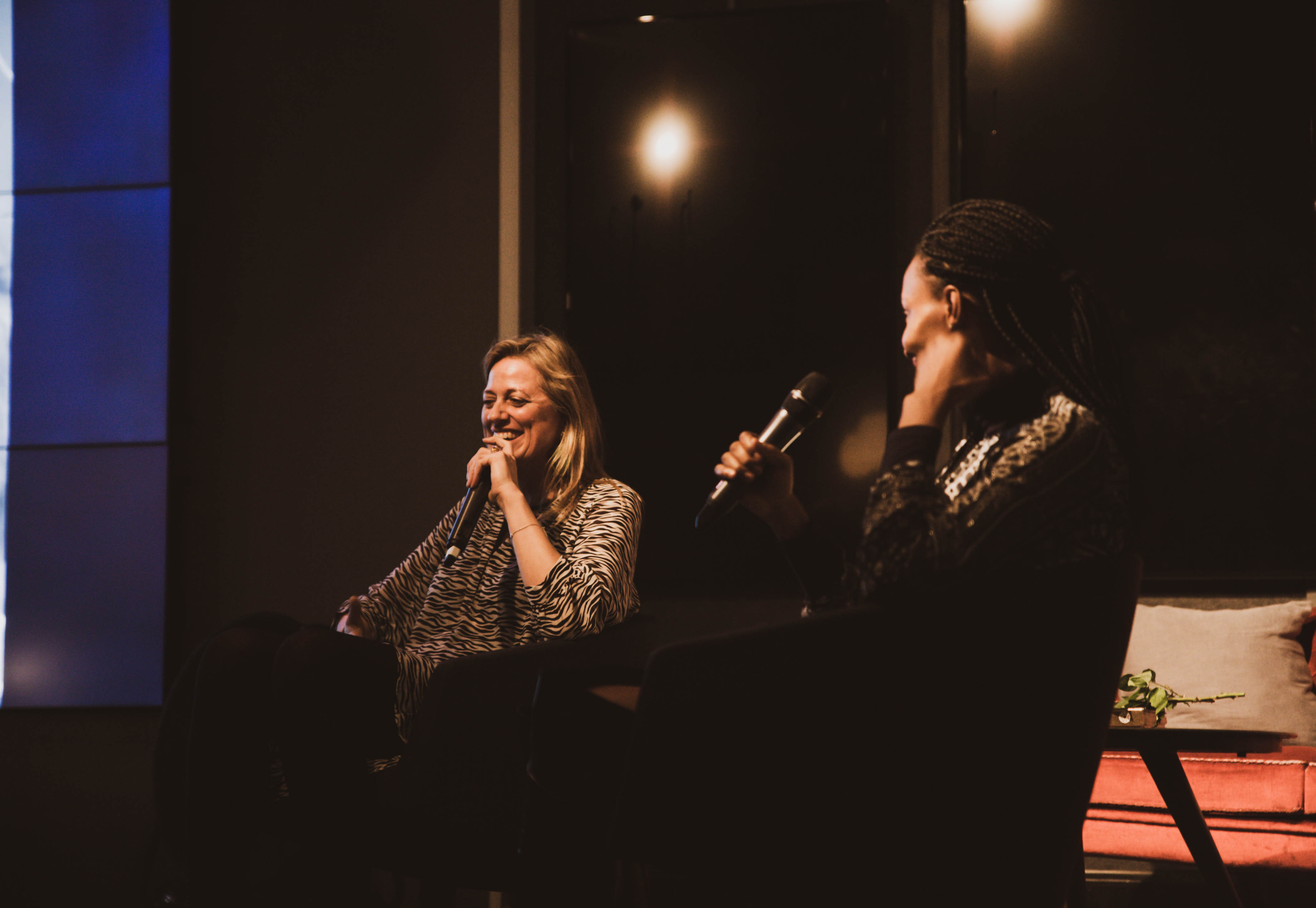 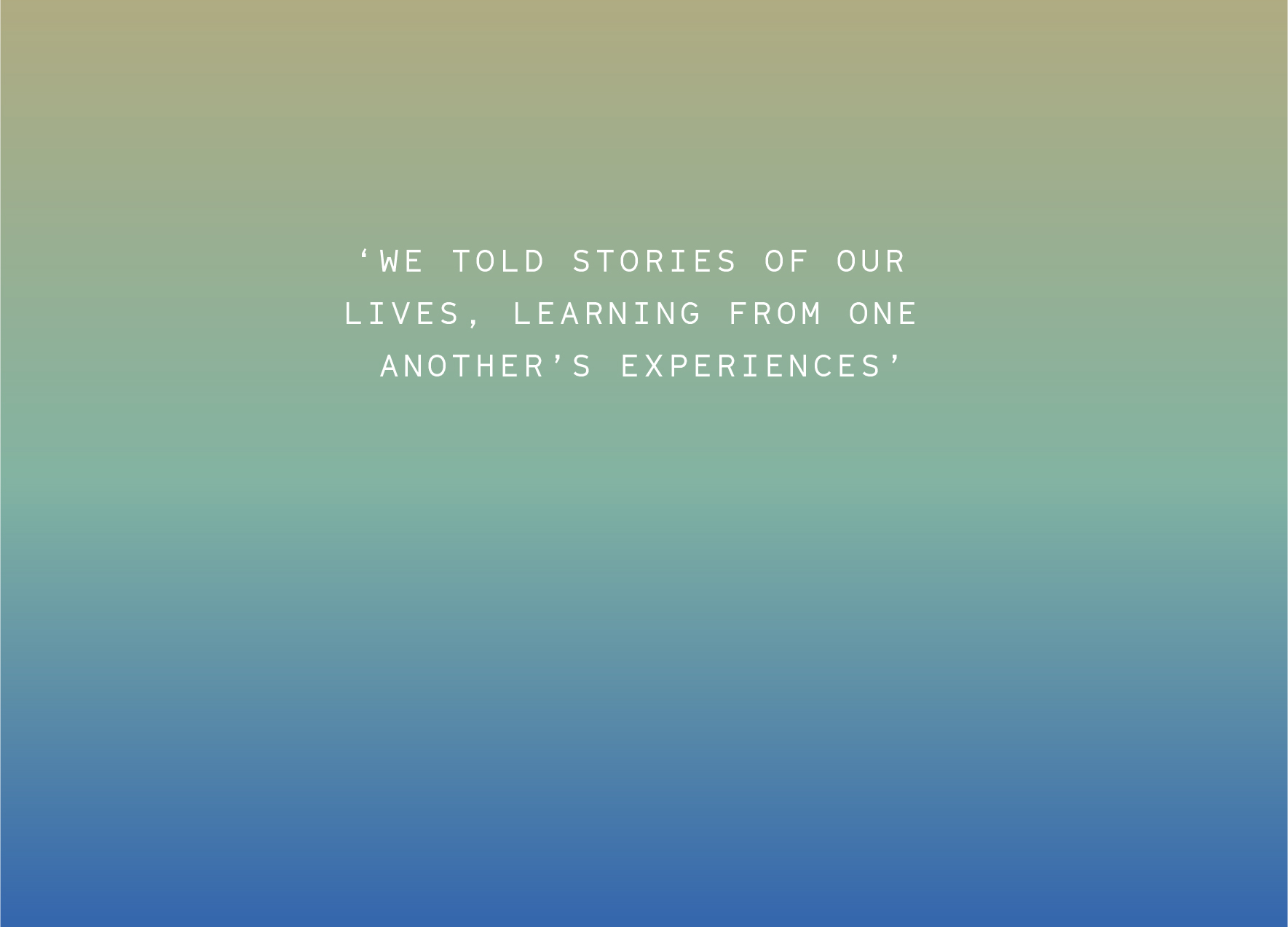